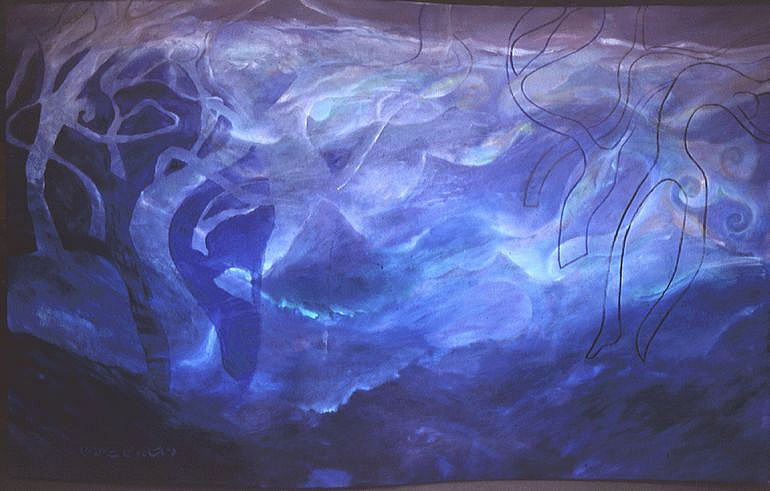 When I consider the resonance or 'connection' of one part of a country (say inland region) with another (say coastline), music-like ideas or motifs often seem to come to mind. Here I began painting a somewhat abstract generic landscape inspired by the spectacular Cape Otway region of the Victorian coastline of Australia, but as the painting progressed, I began to sense a striking resonance with the Australian Snowy Mountains (Mt Blue Cow region) which seemed (rhythmically at least) to be empathetic with the huge and broad oceanic swells so typical of the Cape Otway region. Thus these two 'landscapes' were interwoven on the canvas.

The Otway is characterised by an enormous energy of sea and sky whipped up by Antarctic-borne winds. There is a magnificent rising-and-falling rolling ocean.

But then so too, the Snowy Mountains of Australia, their rhythms, their surface dancing gums, their light. Their grandeur is lateral and expansive. The Australian Snowies rise and fall, ebb and flow just like the sea. The distinctive and highly unusual forms of the snow gums look remarkably like wriggling figures, and collectively their forms are like a magnificently choreographed dance through the landscape.

In the painting I tried to connect the two, to find a common meaning, the 'music' of this place and time.

Home | responses to the Australian landscape | this is a covert scale structure painting this theory was developed by the artist and published in a book in 2003 and then in abridged web form to a dedicated web site principlesofnature.com in 2004. 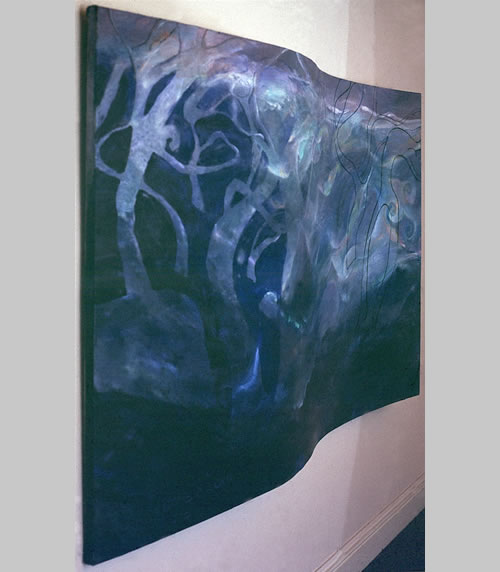